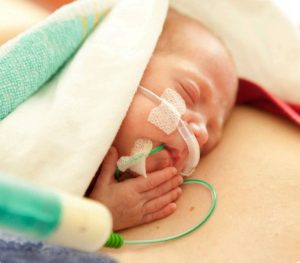 Preterm infants tend to experience difficulties reaching oral feeding, sometimes needing oral stimulation. A study conducted in a children’s hospital in Italy evaluated whether there was a difference in the transition time to full oral feeding between parent-administered and professional-administered premature infant oral motor intervention (PIOMI). The active involvement of parents showed no difference in transition time, and it even offered family-bonding benefits.

For preterm infants, reaching oral feeding can be challenging, and a delayed transition from tube to oral feeding may bring negative consequences. Nevertheless, oral motor therapy has been shown to improve the baby’s oral feeding skills, making this transition easier. The premature infant oral motor intervention (PIOMI) is a standardised oral stimulation program consisting of a 5- minute oral stimulation, usually administrated by a skilled health professional. However, the simplicity of the process enables this intervention to be easily learned by parents after appropriate training.

A single-centre, randomised, controlled, open-label pilot study, was conducted between March 2017 and May 2019 at the Neonatal Intensive Care Unit of Giannina Gaslini Children’s Hospital, Italy. The study aimed to assess whether there was any difference in the infant’s transition time to full oral feeding between parent-administered and professional-administered PIOMI.

A total of 39 clinically stable infants born at 32 weeks’ gestation were randomly assigned to either parent-performed or professionally-performed oral stimulation. Infants assigned to the professional group received the PIOMI from a trained speech and language therapist. In contrast, infants assigned to the parent group received the intervention by one of their parents after being trained and under the therapist’s direct supervision. The PIOMI sessions were performed once a day for seven consecutive days. As a primary outcome, the study evaluated the transition time in days taken to achieve exclusive oral feeding from the first oral feeding attempt. Parental satisfaction with performing the intervention was also assessed before patient discharge through an open-ended questionnaire.

The results showed no statistically significant difference in transition time, weight gain, or hospitalisation length between the two groups. In the parent group, the PIOMI was mainly administrated by the mother (84,2%). The results showed high parental satisfaction, which was strongly related to the perception of improved knowledge of the infant’s needs. Finally, most parents reported an improvement in their infant’s oral motor skills during the course of the intervention, with only one case of exclusive formula feeding in each group.

Acknowledging that the active involvement of parents in their infant’s care has a positive effect on parental independence and no proven negative health consequences for the infant, parent-administrated PIOMI should be considered.

Your ticket for the: Parent-administrated oral stimulation in preterm infants