The world is bright, save our babies’ sight -
Our ROP awareness campaign

We really care about the vision of our preterm born infants! Retinopathy of Prematurity (ROP) should be taken as a serious disease with potentially long-term consequences for the children and their parents and families. According to a survey carried out by EFCNI in August 2019, it is important to inform parents at an early stage about the risk of Retinopathy of Prematurity and keep them involved in every decision.

ROP is a condition found in the eyes of preterm born babies. It is characterised by changes in the developing blood vessels of the retina (the light-sensitive layer in the back of the eye that sends visual signals to the brain).

Although mostly it resolves without problems, in cases where it doesn’t resolve,  this progressive disease can lead to scarring and retinal detachment (separation of the retina from the inside of the eye), causing poor vision or even blindness if not identified and treated accordingly.

Many different factors contribute to the development of ROP.  Babies born before 31 weeks or with less than 1,250g birthweight are at highest risk. One of the main risk factors is the oxygen pressure at room air or during oxygen treatment, which is much higher than in the womb. The healthcare teams monitor oxygen levels in the baby very closely and try to find a balance between enough oxygen to prevent other serious diseases and too much oxygen, which might encourage the development of ROP.

As ROP is one of the leading causes of childhood blindness and therefore one of the focus topics of EFCNI. If you want to join us to raise awareness for this eyesight threatening disease, please support our campaign “The world is bright, save our babies’ sight!” and download and share our materials on your social media channels and website!

Retinopathy of prematurity – not only an acute condition? An interview with Professor Armin Wolf

In this interview, Professor Armin Wolf, Deputy Hospital Director of the Eye Hospital at Ludwig-Maximilians-University Munich, talks about why following up on the eyes of preterm born babies is important, how often should the check-ups be done and for how long should they be continued, and much more. 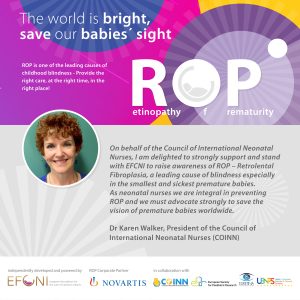 We warmly thank the following parent organisations for supporting the campaign worldwide (in alphabetic order):

The ROP awareness campaign was independently developed and is powered by EFCNI.

More information on the topic Retinopathy of Prematurity is available here.

Your ticket for the: ROP

USD
We use cookies to ensure that we give you the best experience on our website. If you continue to use this site we will assume that you are happy with it.Ok