TREOCAPA: Prophylactic treatment of the ductus arteriosus in preterm infants by acetaminophen

The TREOCAPA clinical trial deals with the effective prophylaxis (a measure to prevent a disease) of a persistent ductus arteriosus (PDA) (see next paragraph below), which often occurs in very preterm born children. The trial is conducted in approximately 65 Neonatal Intensive Care Units (NICUs) in 17 European countries. Preterm infants of a gestational age of 23 to 28 weeks are included in the study. INSERM, a biomedical French research institute, is the sponsor of the trial which is led by Nantes University Hospital in France.  The TREOCAPA trial is a Proof of Viability study of the Conect4Children (c4c) project, which aims to develop a Pan European Paediatric Clinical Trial Network.

What is a persistent ductus arteriosus? 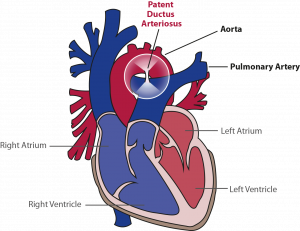 The ductus arteriosus is the vessel, that communicates the aorta (the main and largest artery in the body, that distributes blood enriched with oxygen to all parts of the body) and pulmonary artery (the artery carrying blood from the heart to the lungs where the blood is enriched with oxygen) when the baby is still in the womb. It is present in all babies before birth and normally closes in the days following birth. However, in about 60% of preterm born babies, this vessel remains open. This is most often the case in the more premature ones. If this vessel does not close, babies often experience more complications of prematurity with the lungs, brain, and gut than babies, in which this vessel does close.

How does the study work?

Figure 1. Study procedure in phase II of the study

Figure 2. Allocation of the participants in the study group in phase III

The role of EFCNI in TREOCAPA

EFCNI ensures public and patient involvement (PPI) during all phases of the TREOCAPA clinical trial and is responsible for the coordination and management of a Parental Advisory Board (PAB). We want to make sure that the parents of preterm babies have a say, are informed and reassured throughout the whole process since, in the end, the results will have a direct effect on their lives and those of their children. Moreover, EFCNI provides input on trial materials and is responsible for the communication strategy. The objectives of the communication strategy are:

EFCNI works closely with the study team in France and other project partners to achieve these objectives through several different tasks. The partners we are working closely with are as follows:

What are the differences between these two types of trials? What are the benefits of working together? Questions that may not be so easy to answer at first glance. This article gives an overview of both types of trial and the ways in which they work together, including the prominence of the patient voice.

Your ticket for the: TREOCAPA