A best practice example how to engage employees 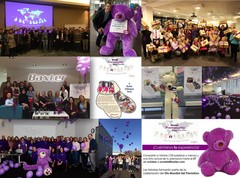 On World Prematurity Day, countless individuals, parent organisations, hospitals, and other institutions showed their commitment towards preterm infants and their families. Every year, EFCNI is impressed by the commitment shown by their partner organisations. In 2017, EFCNI’s corporate partner Baxter celebrated World Prematurity Day for the first time and in more than a dozen countries. We are pleased to introduce a selection of events and activities organised by the company.

Baxter’s global headquarters in Deerfield, USA, organised a Global Neonatal Symposium to raise awareness of preterm birth with about 300 participants. Baxter employees told their NICU experiences and donated for an EFCNI project. Across Europe, Baxter facilities joined global efforts in places such as Benelux, Ireland, Italy, France, Germany, Poland, Portugal, Spain, Switzerland and the UK. Hundreds of employees and their families came together to raise awareness, collected resources for local charities, and learned more about World Prematurity Day and its importance.

Selection of regional and local activities:

Benelux: Employees in Belgium, Luxemburg and the Netherlands followed the Global Neonatal Symposium that was broadcasted live. Human-sized teddy bears raised awareness on the topic and were donated to local hospitals. Baxter employees told their private experiences with preterm birth on posters.

France: Baxter France organised activities in six local facilities with about 150 participants: experts informed about preterm birth and educational posters raised awareness on the topic. Participants could test their knowledge in a quiz.

Germany: German colleagues raised awareness of the unmet needs of preterm born infants. In addition, they collected children’s clothing and toys and handed them over to an Ukrainian charity organisation.

Poland: Baxter’s employees in Poland learned about the prevalence of preterm births and the company’s partnership with EFCNI. They made purple bows on the occasion of World Prematurity Day. Purple muffins were served.

Portugal: The communications team distributed a press release about the partnership with EFCNI. A supplement in a renowned newspaper raised awareness for the topic. The Portuguese parent organisation XXS-Associação Portuguesa de Apoio ao Bebé Prematuro was involved in these activities.

Spain: Employees were asked to share their private experiences with preterm birth. Their stories were spread internally and displayed on plasma screens. A press release on the partnership with EFCNI was distributed to health trade publications.

Switzerland: The regional headquarters in Zurich raised awareness by sharing EFCNI’s presentation on the impact of preterm infants. Employees raised funds by raffling a purple teddy bear and donated the money to a hospital.

UK & Ireland: The UK Head Office in Compton organised a ‘Little Lights’ walk and a baking competition to raise funds for a local charity – which supports families of preterm and ill born babies. In the Dublin office a bake sale and a ‘guess the baby’ competition was held to raise funds. Many employees wore purple and released purple balloons.

Your ticket for the: World Prematurity Day celebrated by Baxter