Vaccines during pregnancy protect mother and baby from infectious diseases

A selective literature survey by Röbl-Mathieu et al. discusses how vaccines can prevent infectious diseases in pregnant women as well as in unborn and newborn babies. The authors conclude that vaccines are a central element in ante- and postnatal care since they protect the pregnant woman as well as her baby both before and after birth from infectious diseases. To illustrate their argument, Röbl-Mathieu et al. refer to the current vaccination guidelines for tetanus, influenza, pertussis, and hepatitis B for pregnant women in Germany.

In order for a pregnancy to progress smoothly, among other factors, the mother’s immune system has to accept the foetus. This is a complex process which requires the mother’s immune system to adapt to the pregnancy. However, a side effect of this is also that both the pregnant woman as well as the foetus are more vulnerable to more severe courses of infection. Even after birth, the baby’s immune system is not yet completely developed. It still has to learn how to respond to the multitude of microorganisms with which it is confronted – a protective mechanism, as the authors of the study make clear, which prevents the newborn’s immune system from going into overdrive. Ultimately, the immune systems of pregnant women, unborn and newborn babies remain vulnerable to infectious diseases.

During pregnancy, mother and foetus are connected via blood circulation. Apart from nutrients, the mother transfers antibodies to her unborn child, the lion’s share during the last four weeks of pregnancy. As Röbl-Mathieu et al. note, this transferral of antibodies compensates to a certain extent the baby’s own low production of antibodies in the first months after birth. Breastmilk contains antibodies as well which are transferred to the baby. Thus, babies receive both during pregnancy as well as in the first months of life passive immunity from their mothers and are protected until they can be vaccinated themselves. 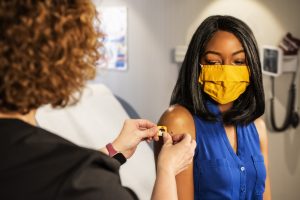 The strategy to actively vaccinate pregnant women makes use of this mechanism, i.e. the transferal of antibodies from mother to foetus. Röbl-Mathieu et al. stress that vaccinating the pregnant women serves two objectives at the same time. First of all, it protects the mother from contracting infectious diseases as well as possible pregnancy complications resulting from them. At the same time, it enables the foetus to develop passive immunity against otherwise dangerous and potentially life-threatening diseases. Live attenuated vaccines are contraindicated during pregnancy, whereas inactivated vaccines are considered to be safe for mother and foetus. Guidelines also recommend to avoid vaccinating pregnant women during the first trimester since during that time miscarriages are still likely and some women might then mistakenly link their miscarriage to having received a vaccine.

Röbl-Mathieu et al. summarise the state of the art of vaccinations during pregnancy against tetanus, influenza, pertussis, and hepatitis B. They conclude that the vaccines, if administered during pregnancy according to the indicated guidelines, significantly reduce the risk of severe cases of infection and complications in both mother and baby. Studies also show that the vaccines are safe, effective, and have only few and mild side effects. 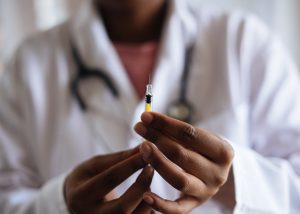 For instance, in the case of pertussis (the whooping cough), a highly contagious respiratory disease, studies show that vaccinating between the 28th and 32nd week of pregnancy (earlier if a preterm birth seems likely) protects the infant during the first three months with a rate of 91% from contracting the disease. This is why the German Standing Committee on Vaccination at the Robert Koch Institute changed its guidelines in March 2020 and officially recommended that pregnant women should receive a pertussis vaccination in each and every pregnancy. Likewise, close relatives and household contacts are advised to check their vaccinations and renew their pertussis vaccination before the baby is born.

In closing, Röbl-Mathieu et al. stress that doctors and maternal care providers play a key role in raising awareness and informing their patients about the benefits of vaccines during pregnancy. Taking Germany as an example, the authors warn that even though the evidence overwhelmingly confirms the benefits, safety, and effectiveness of vaccines during pregnancy for mother and baby, current data shows a rather low rate of acceptance among the German population. However, patient surveys consistently show that pregnant women do follow their doctor’s personal recommendation in these situations. Similarly, both patients and medical professionals alike stress the importance and helpfulness of national guidelines, leading Röbl-Mathieu et al. to conclude that gynaecologists take on an important role in educating their patients and advocating for vaccines during pregnancy.

Your ticket for the: Vaccines during pregnancy protect mother and baby from infectious diseases

Vaccines during pregnancy protect mother and baby from infectious diseases