The role of fathers in breastfeeding

Men can play an important role when it comes to breastfeeding. Within our monthly topic of “Nutrition”, we wanted to get to the bottom of this issue and talked to a well-known expert in this field, Professor Michael Abou-Dakn, Head of Department at the Clinic for Gynaecology and Obstetrics at the St. Joseph’s Hospital Berlin Tempelhof, Germany. 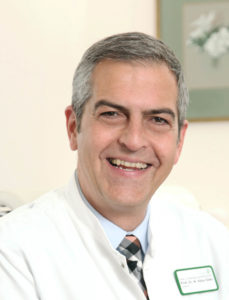 To what extent do men influence women’s decision to breastfeed their child and the frequency and duration of breastfeeding?
International research and our own studies have shown that both the decisions whether women are going to breastfeed or not, as well as the duration of breastfeeding are very decisively influenced by men (fathers). This is particularly true for educationally deprived strata of society, where the influence of men is even more pronounced. What’s interesting is that the partners’ attitude, negative or positive, is frequently taken over by the women themselves.
We were also able to show that expectant fathers who are only briefly informed about the advantages of breastfeeding in a course and who receive essential information on breastfeeding support, are much more supportive later on when problems arise.

Can you observe any regional differences in this regard (e.g. within Europe) and if so, which?
The studies come from different countries and show similar effects. In particular, the influence of education on the initiation and duration of breastfeeding has been proven in many studies. Unfortunately, this also applies to the motivation of women.

According to current research findings, what are fathers’ reservations about breastfeeding based on?
For the most part it is the unawareness of the negative consequences of not breastfeeding. It’s a common believe that industrial substitute products are equal to natural breast milk, which is not the case. This is simply a misjudgement, because pregnancy itself changes the volume of the breast, and breastfeeding doesn’t have a significant influence. Abroad, the financial situation is often brought to the fore. Fortunately, this is less common in Germany due to existing maternity guidelines.

How has men’s behaviour changed over time and where is it heading (e.g. since the 1950s compared to today)?
The attitude towards the uniqueness of breast milk has changed in recent years for both men and women. Overall we haven’t achieved such a significant change with our breastfeeding promotion if you take in account our goal of encouraging as many women as possible to (exclusively) breastfeed their children, even after the first 6 months. Even after the minimum of an exclusive breastfeeding period of up to 5 months recommended in Germany, no significant changes can be observed in recent decades.

Merely the attitude and the initiation of breastfeeding have improved considerably. However, most men today are more intensely involved and included in health related issues and early child care, compared to the 50s. This is probably due to the changed roles of both parents. The introduction of parental leave for fathers was also very helpful here. Because of Scandinavian research we know, that this leads to fathers feeling more deeply involved into parenting, and from own research I can affirm you, that men have an increasing interest in health related aspects during pregnancy and postpartum period. This can be used for corresponding educational work, which is already done by the German network for young families (Netzwerk Junge Familie), the European Foundation for the Care of Newborn Infants (EFCNI), and the German Federal Center for Health Education (BZgA).

To what extent can fathers encourage their partner to breastfeed and positively support her breastfeeding behaviour?
As so often, it is primarily about a positive emotional support of the partner. Pressure, no matter in which direction, is always stressful and often leads to a difficult start to breastfeeding. I am convinced that every woman can breastfeed and every child wants to be breastfed, but often the beginning is not easy and can contribute to failure. Partners who lovingly and empathetically accompany their wife are particularly helpful. This also means that women are relieved in everyday life. We were also able to show that men who are informed about breastfeeding problems and who have got to know and understood suggestions for solutions, as well as midwives or experts in breastfeeding, are helpful counsellors who can motivate their women to continue breastfeeding even in the case of initial irritations.

Special thanks to
Professor Michael Abou-Dakn
Head of Department at the Clinic for Gynaecology and Obstetrics
St. Joseph’s Hospital Berlin Tempelhof

Your ticket for the: The role of fathers in breastfeeding

The role of fathers in breastfeeding