Infants born without enough surfactant may develop a condition called respiratory distress syndrome (RDS). RDS occurs in preterm infants due to the immaturity of their lungs and inability to make sufficient surfactant. On the occasion of our topic of the month “Patient safety and hygiene practice”, we spoke with the neonatologist Dr Angela Kribs, Germany, who together with further experts investigated a less invasive surfactant application protocol (LISA) in extremely preterm infants. The Nonintubated Surfactant Application trial was a multicenter, randomized, clinical parallel-group study conducted in the neonatal intensive care units of 13 German hospitals from April 2009 to March 2012.

In which children is a surfactant application indicated? 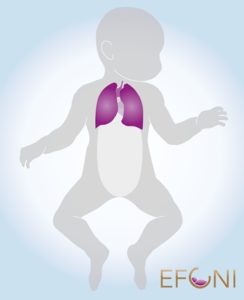 Surfactant is a substance containing phospholipids and proteins. It lines and stabilizes the small bubbles of the lung called alveoli. During pregnancy the lung of the fetus starts to produce small amounts of this substance at 23 to 24 weeks of gestational age. During the following weeks, the production increases and usually infants who are born with a gestational age of 37 weeks or more are able to produce enough surfactant to establish a stable respiration with sufficient gas exchange. Infants who are born with a lower gestational age are at risk for surfactant deficiency with the highest risk in the most immature babies.

At the level of the individual patient indication of surfactant, the application can be based on the gestational age and clinical signs of surfactant deficiency. These are dyspnea and need for supplemental oxygen. Signs of dyspnea are grunting and retractions of the chest. Dyspnea can be treated and should be treated with continuous positive airway pressure (CPAP), but this therapy is only a symptomatic therapy whereas surfactant replacement removes the cause of the dyspnea which is surfactant deficiency.

Infants born with a gestational age below 27 completed weeks who present with any sign of dyspnea, who need CPAP or any supplemental oxygen should receive surfactant very early, that means during the first hour of life. As endogenous production of surfactant  increases after birth especially in infants who are more mature, in these infants it may be justified to wait a little bit longer and to decide whether continuous positive airway pressure alone may be able to bridge the time until endogenous  production of surfactant becomes sufficient. However also in these infants surfactant application is indicated if dyspnea and/ or need for supplemental oxygen persist despite of CPAP.

What are the primary characteristics of less invasive surfactant application (LISA) in preterm infants? What are the major benefits over the conventional therapy?

When surfactant was introduced into the therapy of respiratory insufficiency of preterm infants at the end of the 1980s most preterm infants were intubated and ventilated. Nowadays we have learned that mechanical ventilation has many risks and should be avoided if possible. Early CPAP immediately after birth is one strategy to avoid mechanical ventilation. Furthermore use of CPAP allows the natural function of the larynx which is important during perinatal transition from intrauterine to extrauterine life. But early CPAP is usually related to surfactant withholding. Less invasive surfactant application (LISA) is a strategy to combine CPAP with surfactant. Surfactant is applicated during CPAP supported spontaneous breathing via a thin intratracheal catheter.

The major benefits of LISA over the conventional therapy are the preservation of spontaneous breathing and the avoidance of mechanical ventilation related risks.

What are the most important study* results?

The study was done in a cohort of extremely preterm infants with a gestational age of 23 to 26 weeks. The most important results of the study are that the infants in the LISA group had less days of mechanical ventilation, less pneumothorax and less severe intraventricular hemorrhage. In the whole, more infants in the LISA group survived without serious complications of prematurity (50,5 vs. 35,6%, p=.02)

Your ticket for the: The benefits of the less invasive surfactant application (LISA) in preterm infants