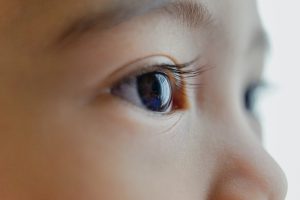 The CARE-ROP study identified ranibizumab as an effective treatment to control acute retinopathy of prematurity (ROP), an eye disease that affects preterm babies. For 16 preterm children entering the follow-up period, their ophthalmologic- and neurodevelopment was assessed at the one-year and two-year visits post-baseline. The patients’ outcomes of ranibizumab usage are very reassuring regarding long-term safety. Yet, late reactivation of ROP can represent a challenge and calls for regular follow-ups.

Retinopathy of prematurity is still one of the leading causes of childhood blindness worldwide. ROP mainly occurs in the smallest preterm babies, as they tend to produce first too little and then too much of a certain growth factor (VEGF), which can lead to severe consequences like vision loss or blindness. As a treatment, injections of a molecule into the eye that binds the excess VEGF are used. Ranibizumab is one of these VEGF-binding molecules and was investigated in a randomized controlled clinical trial (CARE-ROP). Two ranibizumab dosages were compared, and the core study confirmed the short-term effectiveness of both doses (0.12 and 0.20mg).

Intending to analyse the long-term safety of the two ranibizumab doses, researchers collected data from the follow-up visits of 16 preterm children. These follow-ups took place after one and two years of the CARE-ROP trial, and their main focus was the ophthalmologic and neurodevelopmental outcomes. The one-year tests included orthoptic status, cycloplegic retinoscopy, refraction, slit lamp exam and measurement of intraocular pressure. At year two, the presence or absence of cerebral palsy, deafness or blindness was assessed.

During the follow-up study period, only one infant in the 0.20mg ranibizumab group had a late reactivation of active ROP, while 15 infants had no treatment after the end of the core study. Regarding functional outcomes, both groups (0.12mg and 0.20mg) reported relatively mild levels of myopia after one year, and only one infant developed high myopia. Similarly, 15 of 16 infants were able to fixate and follow moving objects and had no negative structural outcomes of the macular region.

Only ten patients were analysed at the two-year mark regarding neurodevelopmental outcomes, which represents a limitation when interpreting these results. Nevertheless, no infant in this trial was reported deaf or with cerebral palsy at two years. It is important to mention that cerebral palsy can sometimes only be diagnosed after the age of 2 years, indicating the need for longer follow-up visits. Another positive finding from CARE-ROP was the fact that the Mental Developmental Index (MDI) was within normal limits for six out of ten infants. Only one infant in the 0.12mg group was reported to have severe developmental delay.

Already during the core study, the CARE-ROP researchers established that ranibizumab does not lead to a prolonged systemic VEGF-suppression in the circulation. This is important since VEGF suppression in the circulation may affect growth and development of other organs outside the eye. The current results indicate that the treatment with the two tested doses of ranibizumab did not negatively impact the infants’ overall development. Based on these data, ranibizumab for ROP appears to be safe and effective. However, late reactivations of ROP can be a possibility, and frequent and long-term follow-up exams must therefore be prioritised after ranibizumab treatment for ROP. For this purpose, an ROP follow-up card for treated infants can be used to plan and document all scheduled ophthalmological follow-up exams. An example for such an ROP follow-up card can be downloaded from the German Ophthalmologic Society’s website (in German): https://t1p.de/lmu4

Your ticket for the: One- and two-year follow-up outcomes of the CARE-ROP study