Putting prematurity on the agenda of the Brazilian Government 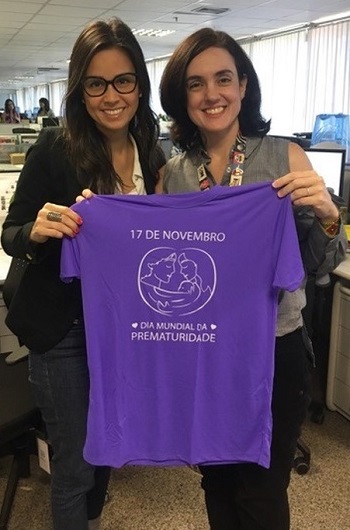 A guest article by Denise Suguitani, Executive Director of the Brazilian Parents of Preemies’ Association

Brazil is the 10th country in the world ranking of preterm birth.

Since 2014 the nonprofit organisation ‘Brazilian Parents of Preemies’ Association’, known as ‘ONG Prematuridade.com’ has been dedicating its work to address prematurity based on three pillars: raising awareness, prevention of preterm birth; permanent education to train health professionals, and advocating in the interests of families of preterm infants, acting in the area of public policies.

In the beginning of June 2019, the organisation participated in several meetings about the topic of preterm birth with Brazilian Government representatives. Denise Suguitani, the NGO’s Executive Director, joined meetings with parliamentarians, senators and deputies, as well as with managers from the health sector, where they addressed topics such as how can public policies focus more on preterm birth and how the organisation can support the main government strategies aimed at this subject.

On the 11 June, Denise, together with Suellen Sátiro, a volunteer from the NGO at the Federal District and the mother of two preterm babies, participated in an inter-ministerial meeting, attended by representatives of the Ministry of Health, the Ministry of Women, Family and Human Rights and the Ministry of Citizenship, in order to align actions aimed at helping the families of preterm babies in Brazil, with a special focus on the role of the preterm babies’ family.

On another important occasion, Denise spoke with Janini Ginani, Coordinator of Social Policies for Infants’ Health at the Ministry of Health, discussing subjects such as: the lack of neonatal beds, an extended maternity leave for mothers of preterm infants, psychological support for the families, the preparation for discharge and follow-up care, challenges for the expansion and improvement of strategies like Kangaroo Care and Baby-Friendly Hospital Initiative, among others. Denise and Janini spoke about the creation of a ‘Preemie-friendly’ quality seal for health institutions that meet minimum requirements of good practices and humanisation, with the aim of stimulating hospitals to improve their services.

Another valuable achievement for the cause in Brazil was the articulation to maintain the Joint Prematurity Parliamentary Front at the Congress, ensuring that the subject of preterm birth receives the attention it deserves in a country with almost 340 thousand preterm babies being born every year. Composed of senators and deputies, the Front was constituted in 2017 by an initiative of the Brazilian Parents of Preemies’ Association, and the aim is to improve the existing laws, suggest others and to monitor their effectiveness. Besides the bill that extends maternity leave for mothers of preterm babies, another project that should be on focus by the Front is the bill that officially establishes 17 November as World Prematurity Day and provides for actions and campaigns focused on this theme throughout the country throughout November.

In a country of continental dimensions such as Brazil, the fact that the central Government opened the dialogue with the civil society about prematurity, is a great step for the cause, once possible changes affect policies that benefit citizens from the entire national territory. “Representing the voice of thousands of families and being aware of the major difficulties they face every day, our goal is to bring those demands to Health managers and policy makers. Thus we can collaborate to expand successful existing initiatives and propose others that aim at urgent and extremely necessary political changes, such as the extension of maternity leave for mothers of preemies,” explains Denise. “Political articulation to advocate in the interest of the families is essential to change the reality of preterm birth in our country. Regardless of how long it might take, believing and joining forces to fight for these changes are the first steps for them to happen”, concludes Denise.

Your ticket for the: Putting prematurity on the agenda of the Brazilian Government

Putting prematurity on the agenda of the Brazilian Government