We are honoured to announce that EFCNI is among the co-editors of a new report by the World Health Organization (WHO) and UNICEF, representing the voice of parents whose children have been affected by preterm birth. 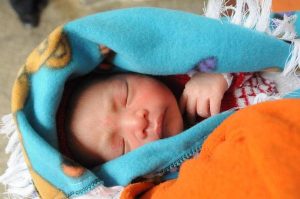 The report shows that nearly 30 million babies are born too soon, too small or become sick every year and need specialised care to survive. Key findings of the new report “Survive and Thrive: Transforming Care for Every Small and Sick Newborn” were launched at the Partners Forum, hosted by the Government of India 13 December in New Delhi.

EFCNI has been one of the contributors to this report, representing the voice of parents whose children have been affected by preterm birth. EFCNI’s Co-Founder and Chairwoman Silke Mader states: “When my children were born too soon, I experienced an emotional rollercoaster and was struggling with the challenges of preterm birth. A strong partnerships between health care professionals and parents is the best way to face the emotional rollercoaster of having a small and sick newborn and to overcome the obstacles.”

On 13 December, key findings of the report were launched at the Partners’ Forum of the Partnership for Maternal, Newborn and Child Health (PMNCH) in New Delhi, hosted by the Government of India, where 130 countries decided on better policies for newborns.
Transforming care for the 30 million vulnerable newborns who are currently being left behind is a smart investment in the health and development of future generations. It will also significantly move us along the path to achieving the United Nations Sustainable Development Goals (SDGs), through universal health coverage (UHC), by 2030.

UNICEF and WHO, with support from partners including USAID, Every Preemie Scale, Save the Children, LSHTM, and the Gates Foundation, have collaborated on a technical report focusing on small and sick newborns. The report will contribute to advancing the goals set out in the United Nations (UN) Secretary-General’s Every Woman Every Child Global Strategy for Women’s, Children’s and Adolescents’ Health (2016–2030) and builds upon the momentum of Every Newborn: an action plan to end preventable deaths.

The Key Findings report, Survive and thrive: transforming care for every small and sick newborn, provides an overview of what will be presented in the full report. It outlines the global problem, showcases the progress, summarizes what can be done to transform inpatient care for small and sick newborns, and demonstrates the importance of data to guide investment and improve quality and equity. It presents a clear call to action to accelerate progress towards the Sustainable Development Goals to ensure every newborn has the chance to live a healthy and productive life.

The report is produced by a coalition of organizations that support countries to implement the Every Newborn Action Plan. These organizations include, among others, the World Health Organization, UNICEF, USAID, the Bill & Melinda Gates Foundation, Save the Children, London School of Hygiene and Tropical Medicine, International Pediatrics Association (IPA), Council of International Neonatal Nurses (COINN), the International Confederation of Midwives (ICM), European Foundation for the Care of Newborn Infants (EFCNI), Preterm Birth Initiative, Sick Kids Centre for Global Health, Every Preemie at Scale and Little Octopus.

Your ticket for the: New global report shows: Nearly 30 million sick and preterm newborns in dire need of treatment every year