Neonatal real world data for research purposes – what is the parents’ view? 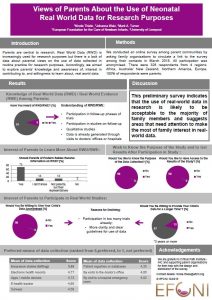 Real world data (RWD) in medicine is data derived from a number of sources, for instance surveys or focus group interviews that are associated with outcomes in a heterogeneous patient cohort in real-world settings. It is increasingly used for research purposes, yet there is a lack of data about parental views on the use of this data which had been collected in routine practice for research purposes. But parents of neonates are central to research. Accordingly, EFCNI[1] in collaboration with the University of Liverpool[2], aimed to explore the parents’ knowledge and awareness of, their interest in contributing to, as well as their willingness to learn about RWD.

In order to find out about the parents’ standpoints, an online survey was conducted and shared among parent communities by asking parent organisations to circulate a link to the survey among their contacts in March 2018. All participation was anonymised.

This initial survey indicates that the use of RWD in research is likely to be adequate to the majority of family members. Furthermore, it proposes areas that need attention to make the most of family interest in RWD. 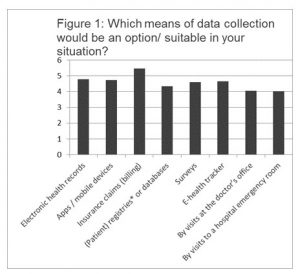 Your ticket for the: Neonatal real world data for research purposes – what is the parents’ view?

Neonatal real world data for research purposes – what is the parents’ view?