Ann & Robert H. Lurie Children’s Hospital of Chicago is a state-of-the-art, 22-floor facility that opened in 2012 on the campus of the hospital’s academic partner Northwestern University Feinberg School of Medicine. It was built to replace the previous facility (called Children’s Memorial Hospital), providing expanded capacity and innovative, child-friendly design that promotes healing. During every stage of the planning process, project leaders met with the hospital’s Kids and Family Advisory Boards to ensure that design decisions incorporated their needs.

One of the innovations at Lurie Children’s is the design of its neonatal intensive care unit (NICU), which has all private rooms, like the rest of the hospital. While there is sufficient evidence that NICUs with all private rooms benefit newborns and their families, the primary concern with this model expressed by caregivers is not being able to visually monitor babies as easily as in the traditional NICU ward model that has beds arranged in a large open room. The layout of the 44-bed NICU on the 14th floor of Lurie Children’s, with its four transparent nursing stations, each surrounded by a grouping of patient rooms with glass doors, combines the best of both models. It provides privacy and quiet for families and sufficient visibility of infants for caregivers. 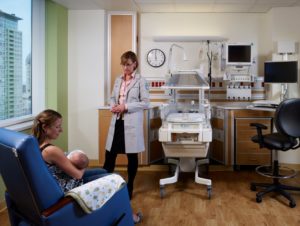 The remaining 16 NICU beds are part of the Regenstein Cardiac Care Unit, where patients with heart conditions are treated from admission to discharge. The patient rooms in this unique unit are designed to meet the technological requirements of an intensive care room, while providing the family amenities and atmosphere of an acute care patient room. This acuity-adaptable model helps improve patient safety and comfort by reducing transfers within the hospital.

The NICU at Lurie Children’s also includes transitional care rooms that are equipped to ensure that new parents receive necessary instruction and hands-on practice in caring for their baby in a simulated home setting. These rooms are designed to build family members’ competence and confidence, which helps reduce re-admissions. 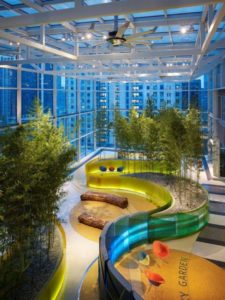 To help reduce the stress of hospitalization and provide families with an inspiring respite space, Lurie Children’s features a striking Crown Sky Garden on the 11th floor. Designed by world-renown landscape architect Mikyong Kim, the garden combines light, sound, water and wood elements to create an oasis for parents and play areas for kids.

Another unique feature at Lurie Children’s is its creative, child-focused interiors that were designed in partnership with over 20 of Chicago’s premier cultural and civic institutions. In the hospital’s main lobby, families are greeted by near life-size models of a mother humpback whale and her calf that were donated by the Shedd Aquarium, while on the 12th floor, kids can play in a customized fire truck cab donated by Pierce Manufacturing to recognize the hospital’s longstanding partnership with the Chicago Fire Department. Each floor of the hospital has its own creative theme and exhibit. In the NICU lobby, for example, the Adler Planetarium developed an interactive exhibit that invites families to press a button with their baby’s birthday to light up the corresponding astronomical constellation. 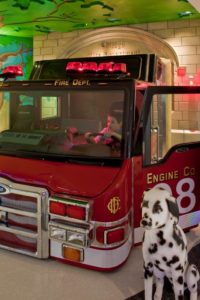 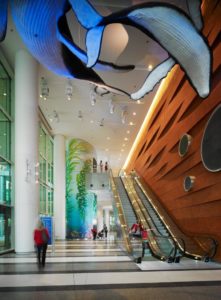 Now Lurie Children’s is in the process of expanding its inpatient capacity from 288 beds to 360 by November 2019. Twenty beds will be added to the NICU, which will expand to the floor above. 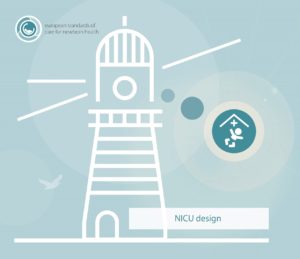 Your ticket for the: Lighthouse Project: NICU Design at Lurie Children’s Hospital of Chicago