Age-related macular degeneration (AMD) is a degenerative disease of the eyes and is one of the most common causes for visual impairment in industrialised countries. In the past multiple studies have linked visual degeneration to low birth weight. 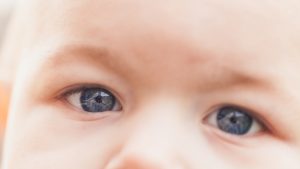 Fetal development is suspected to play a role in the development of age-related macular degeneration, but the link between low birth weight and AMD has not been well studied yet. To further investigate this link, Fieß et al. conducted a study with data from participants of the Gutenberg Health Study cohort in Germany. 6492 participants at an age of 35 to 74 years were included, for whom data for AMD grading and self-reported birth weight were available. They were examined at the beginning of the study and at a 5-year follow-up. To analyse differences, participants were divided into three groups according to their self-reported birth weight (low: < 2500g, normal: 2500g-4000g, and high: > 4000g).

At the start of the study, ophthalmologic exams were conducted for all participants to assess the condition of their eyes. In addition, arterial hypertension, body mass index, smoking status, socioeconomic status, blood lipids and the history of AMD in family members were assessed to adapt the calculations for other risk factors for the development of AMD in the participants.

One of the limitations of this study was due to the lack of data for gestational age. Therefore, low birth weight may have been linked to prematurity, but it was not possible to analyse the impact of premature birth. As preterm birth itself can affect the development of the eyes in childhood and may lead to AMD in adulthood, further research should be conducted. Apart from the limitations, some of the strength of this study were the large sample size with 6492 participants, the strict standardisation of examinations and withholding the birth weight data from examiners.

Despite the limitations due to missing data, the study of Fieß et al. shows a high probability for a negative effect of low birth weight on the development of AMD.

Your ticket for the: Low Birth Weight may be Linked to Age-Related Macular Degeneration (AMD)