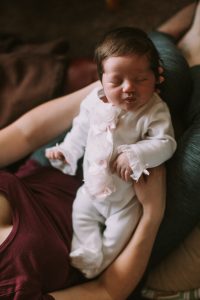 There is concern that neonates might contract infections more easily, but data on the infection rate of SARS-CoV-2 in babies is limited. To gain more insights, researchers in the UK analysed incidence, transmission and severity of SARS-CoV-2 cases in newborn babies receiving hospital care.

Due to the lack of data about how the virus spreads to newborns and how it affects them, guidelines for the management of babies at risk have varied. However, the World Health Organisation and UK guidance have advocated keeping children with their mothers. This is important for breastfeeding, bonding and development of the baby, as separation has proven to impair developmental outcomes.

The study by Gale et al. included 66 babies who tested positive for SARS-CoV-2 in the first 28 days after birth, during the timespan of March 1 to April 30, 2020. In total, about 118,347 live births have occurred in the UK during this timespan. The incidence of neonatal infection with SARS-CoV-2 was 5.6 per 10,000 birth. 28 of the 66 babies had severe SARS-CoV-2 infections and 16 of the 66 neonates were born preterm. The mothers of 17 of the sick babies had tested positive for SARS-CoV-2 and two of them had potentially passed the virus vertically to their children within the first 12 hours after birth. In eight cases, infection was suspected to have happened nosocomial, meaning through the hospital environment, since mothers were not infected. Six of the nosocomial cases happened more than seven days after birth in Neonatal or Paediatric Intensive Care Units.

In the 17 cases where both mother and child were infected, eight of the newborns stayed with their mother. These mothers were instructed to wash hands before engaging in contact or touching feeding bottles, and to wear masks during contact and breastfeeding. However, seven of the 17 babies were separated from their mother directly after birth.

Common signs of SARS-CoV-2 in infants included hyperthermia, vomiting and poor feeding, lethargy and respiratory abnormalities. 25 babies also had chest x-rays done, which revealed atypical imaging in 14 of them. Moreover, in 17 of 31 babies, lactate levels were elevated and in 14 of 49 babies, C-reactive protein was higher than usual. Additionally, five of 54 newborns presented a low count of lymphocytes.

Furthermore, 22 of the total 66 children needed one or more forms of respiratory support, of which three received invasive ventilation. Ten of them got non-invasive ventilator support and all of them received supplemental oxygen. However, it is not certain if SARS-CoV-2 was the sole cause for needed respiratory support. In some cases, it may have been necessary due to preterm birth or other causes.

The study revealed that newborns are unlikely to contract the virus from infected mothers, and if they do, the symptoms are mild. However, many newborns in the UK were not tested for the virus within 12 hours after birth and many remained without symptoms. Therefore, the actual number of vertical infections is unclear. Additionally, nosocomial transmission was suspected in 9% of infected neonates, making this rate quite high. Thus, hospitals must take higher precautions to prevent the spread of viruses.

Nevertheless, short-term outcomes of neonatal SARS-CoV-2 infection were good, but long-term outcomes are not known at this point.

The limitations of this study include the inability to confirm vertical transmission, lack of data on breastfeeding and its link to virus transmission, and the unknown number of asymptomatic infants.

Article available at: The Lancet

Your ticket for the: Characteristics and outcomes of neonatal SARS-CoV-2 infection in the UK