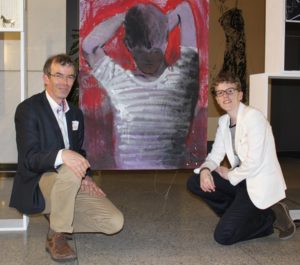 In 1989, Gert van Steenbrugge became father of Anja. Due to the HELLP syndrome her mother developed, Anja was born by cesarean section at 26 weeks of gestation, weighing 800 gr. More than 20 years later, she successfully completed her vocational education and now she works for a well-known restaurant in Voorburg. EFCNI had the chance to ask them some questions about their experiences with the challenges of preterm birth, with a special focus on the topic Follow-up and continuing care.

How did healthcare professionals and teachers support Anja’s development?

Gert van Steenbrugge: Throughout her life and in specific after care programmes, Anja was supported by a considerable number of professionals, such as – of course – neonatologists/pediatricians, a rehabilitation doctor, physiotherapists, a child neurologist, an audiologist, a speech therapist and an eye doctor who operated her twice for an eye correction. During her time at school, she also received extra support. At the beginning of her professional career, a job coach supported her at the workplace.

All in all, we are glad that all these professionals and teachers at schools of special education strongly supported Anja, which resulted in a young adult who has her place in society and enjoys what she has reached.

Anja, is your preterm birth something you deal with often and does it affect you still?

Anja van Steenbrugge: Though my hearing aids and additional equipment are very helpful, my hearing disability has a great impact on my social and professional life. The cerebral palsy causes that my work pace is slower than my colleagues’, and complicated instructions are sometimes hard to understand for me.

Another typical outcome of my preterm birth is my short stature. I stopped growing at a height of 1.58 m. Thus I’m a small women and I look younger than I am in fact. Years ago at the age of 21, I visited a dance festival, and had to show my identity card, because they didn’t believe that I was 18 years of age. However, I perceived moments like these as funny rather than problematic. Practically spoken, my height sometimes hampers my functioning at work in the kitchen, because I cannot reach objects on higher shelves and need a stool or help of a colleague. The same may happen in the supermarket with items that I cannot reach, so I need help from another customer.

Did Anja have to face obstacles or difficulties in her childhood and youth?

Gert van Steenbrugge: Caused by her preterm birth, Anja has cerebral palsy resulting in several developmental problems. The most noticeable ones are a severe hearing disability (60-75% hearing loss) and physical limitation (mild unilateral paresis). When Anja started school, it turned out that she had cognitive and learning impairments. Particularly imprinting of difficult words and foreign languages was and still is difficult for her. But through learning by practice and at a slower pace, Anja developed well and was able to complete her education as a cook.

Within the first months after birth, when Anja was discharged, the great concern was that she couldn’t hear at all. Therefore, we took her to the audiologist in her first year of life and to our great surprise, after specific tests, Anja showed hearing residues. This offered the chance that she would be able to develop speech, which fortunately happened after many years of intensive training with speech therapists.

What milestones of her development do you remember?

Gert van Steenbrugge: One big milestone was the fact that, in spite of the prediction of the neurologist, Anja was able to walk normally, although she needed support from physiotherapists for many years. Although the rehabilitation doctor was about to prescribe a customized bike, she even learned to ride a ‘normal’ bike, albeit later than her peers.

In addition, we as parents were very glad that with better prospects of speech she could move from an institute for deaf children to a school for special education of children with hearing impairment.

At the age of 27, Anja left her parental home and was offered a nice apartment, where she has lived with limited guidance of care providers. This was, for Anja as well as for us as parents, a great and important step in her life. Certainly, it was the ultimate milestone: the moment she started to live independently.

Anja, what are your achievements you are most proud of?

Anja van Steenbrugge: I am most proud that I did well at school and became a cook. I am very happy that, in spite of my limitations, I have a job and was accepted as cook in a well-known restaurant where I can prepare nice dishes for the guests. What I’m also proud of is my nice home, where I can live my own life being independent and do my housekeeping myself.

In addition, I am a member of a patient organisation for youngsters with hearing impairment, where I met friends. I love the activities and weekends with them. Finally, I became a volunteer and help to organise activities, such as a cooking workshop.

Do you remember specific aftercare routines?

Anja van Steenbrugge: During my life there were numerous doctor consultations, but fortunately, as time went on, it all became less frequent, although reasons for doctor’s visits always remain. Of course, I remember a lot of aftercare moments, among which were painful treatments by the physiotherapists, numerous examinations by the eye doctor and optometrist, and an MRI examination. Oh yeah, I will never forget the day I was in a hospital bed for hours waiting for an eye surgery and heard that the operation was cancelled, because of an error in the operation scheme, causing no anesthetist available. I went home and had to wait another two weeks before the operation was scheduled again.

We warmly thank you for this inspiring and encouraging interview!

Your ticket for the: Against all odds