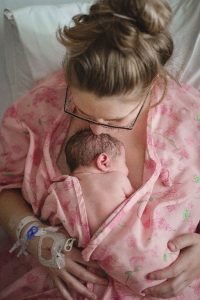 Researchers in Norway explored experiences of mothers of very preterm children regarding early skin-to-skin contact vs. a traditional separation approach. Mothers benefited from skin-to-skin contact as it ensured them the vitality of the infant, promoted bonding and gave them an overall positive, emotionally overwhelming experience.

In the last decades, contact between mother and child immediately after birth has changed. Nowadays, skin-to-skin contact (SSC) is mostly promoted, which also applies to caesarean sections. According to the World Health Organisation, SSC should also be supported in preterm born infants, even in case of necessary immediate medical interventions. The benefits of SSC include more stable body temperature and improved mother-infant bonding. However, traditionally, a very preterm born infant is usually immediately taken to the neonatal intensive care unit and separated from the parents.

This new study aimed at exploring the experiences of mothers of very preterm born infants who could engage in skin-to-skin contact right after birth and those who were separated from their infant. Interviews were conducted with ten mothers, five mothers from each group, giving birth in three hospitals in Norway.

Three main themes evolved after analysing the interviews: affirmation of the infants’ vitality, bonding challenges and benefits of skin-to-skin contact. Mothers described the health condition of the baby as their biggest concern. When mothers were separated they worried about the child’s health status and they asked themselves what was happening to their child. They described this time as frustrating and frightening. These thoughts and fears weren’t present in mothers in the SSC-group. The presence of healthcare professionals and constant information flow also contributed to the feeling of security.

Bonding after a very preterm birth was perceived as challenging by all interviewed mothers. SSC promoted feelings of motherhood, however, whereas traditional care evoked feelings of ‘coldness’ and ‘separation’ when seeing the infant in the incubator.

Early skin-to-skin contact was perceived as an overwhelming emotional experience and had positive effects, both physically and emotionally. For example, the child developed a stable breathing pattern and was relaxed during the contact. However, if SSC was not possible, mothers also profited from seeing photos of the child, expressing breastmilk, handing the infant a personal item e.g. a cloth or SSC between father and child.

The described experiences of mothers with very preterm born infants underline the necessity to promote skin-to-skin care and kangaroo care in all hospitals as both mother and child benefit from it immensely.

We would like to add, however, that also the father’s role in providing skin-to-skin contact is crucial. This, however, was not the focus of this study.

Your ticket for the: Mothers’ experiences of early skin-to-skin contact vs. traditional separation approach after a very preterm birth