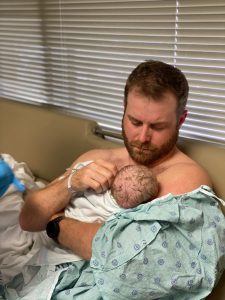 Although the benefits of skin-to-skin care (SSC) for preterm and low birthweight infants are known to the neonatal community, some health centres still struggle with implementation. To increase SSC within the first 72 hours of life among extremely low birthweight (ELBW) infants, a multidimensional approach was chosen at a Level IV university-based regional intensive care nursery (ICN).

SSC has many benefits for mothers and infants, especially those born preterm. Previous studies showed that in extremely low birthweight (ELBW) babies, early and frequent infant-parent SSC increases life expectancy and improves short- and long-term health outcomes. Unfortunately, many health centers still do not regularly implement this practice as early or as frequently as evidence supports.

As an example, in a 58-bed, Level IV ICN at a children’s teaching hospital, the implementation of SSC during the first 72 hours of ELBW infants’ lives has only been achieved 7% of the time. Motivated to increase this rate to 80% within one year, a multidisciplinary team of neonatal providers conducted an intervention to encourage SSC from July 2018 to December 2019, using the Institute of Healthcare Improvement quality improvement methodology.

Following this approach, unit policies and guidelines were updated to facilitate early skin-to-skin. A readiness checklist was developed, and the education of parents, staff and providers on SSC was prioritised. The balancing measure was the rate of severe intraventricular haemorrhage (IVH), a risk commonly associated with SSC. Data collected from monthly chart reviews were used to analyse the changes in SSC rate during the intervention.

Ultimately, 52 infants born under 28 weeks’ gestation or weighing less than 1,000g were included in the project. After the intervention, there was a significant improvement in the rate of early SSC from 7% to 84%. Furthermore, the analysis showed no difference in the balancing measure of severe IVH, encouraging the practice of early SSC among the staff.

The initiative was successful, and the team calls for future efforts to measure long-term health and neurodevelopmental outcomes from the practice of early SSC on extremely low birth weight babies.

Your ticket for the: Increasing Early Skin-to-Skin in Extremely Low Birthweight Infants