Infants born preterm (<37 weeks of gestation) or with a low birthweight (<2.5 kg) are at high risk for decreasing body temperature during transportation to the hospital. Hypothermia in preterm infants is a risk factor for increased mortality and morbidity (e.g. respiratory distress syndrome). Therefore, effective thermoregulation during transport is of outmost importance. 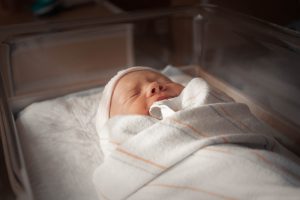 In the study by Glenn et al., interventions were developed to increase the efficacy of thermoregulation in transported newborn infants. Close collaboration with the transportation teams at the University Hospitals Rainbow Babies and Children’s Hospital in Cleveland, USA, was key, which lasted from January 2016 to December 2019. A total of 380 infants were included in the study, with a range in gestational age of 22 to 40 weeks and a weight range of 420g to 4220g. 229 of the infants were born preterm or with low birthweight.

The first 17 months of the study were used to gather baseline data, revealing an average of only 60% of preterm or low birthweight infants, who were admitted to the NICU with normal temperature (36.5°C – 37.5°C). Afterwards, together with a multidisciplinary team consisting of neonatologists, transport staff and paediatricians, Glenn et al. reviewed the transport protocols and chose a new set of interventions. These included controlling the heat of the transport incubator, using plastic wrap, exothermic warming mattresses, and temperature monitoring. For the intervention, the team used the Voyager Airborne Transport Incubator and Velcro closure wrap.

Furthermore, interventions included a check of temperature before the start of transport, and checking it continuously if it was outside the acceptable range. Feedback of the transport team indicated that most infants who arrive hypothermic at the NICU were already in this state at the beginning of transport. Staff members had difficulties normalising the temperature during transportation. Therefore, a supply checklist, increase of temperature in the operating room and immediate notification of the transport team of an upcoming delivery were implemented to address these difficulties. Additionally, and in response to the feedback, the heat of the transport incubator was made adjustable from 32-37°C depending on the infant’s weight and age (<1 day or >1 day) to meet their individual needs.

Overall, the interventions resulted in an increase by 36% (from 60% to 96%) of infants admitted within normal temperature range This could be achieved through educating staff on the importance of temperature control and by making only minor changes to thermoregulation. Especially when resources are low, interventions like using the plastic wrap are an effective way to prevent hypothermia in neonates during transport.

One of the limitations of this study is its dependency on the documentation of the transport staff. Thus, in some cases, performed interventions may not have been recorded. Nevertheless, the great increase in newborns who were admitted to the NICU within the goal temperature of 36.5°C to 37.5°C shows that the interventions were successful.

Paper available at: Journal of Perinatology

Your ticket for the: Improving thermoregulation in transported preterm infants