Act early! Screen early! May is dedicated to our pre-eclampsia awareness campaign 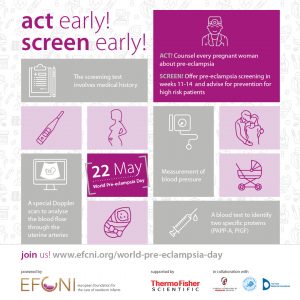 May is Pre-eclampsia Awareness Month and 22 May is World Pre-eclampsia Day. We have been committed in raising awareness for this severe pregnancy complication ever since and launched our new, international awareness campaign Act Early! Screen Early! to join forces with affected women and medical experts around the world.
Pre-eclampsia and eclampsia may be rare conditions but the consequences can be immense – even fatal for both mother and child if untreated. Supported by renown medical societies like the Fetal Medicine Foundation (FMF), the European Association of Perinatal Medicine (EAPM) and the European Board and College of Obstetrics and Gynaecology (EBCOG), as well as by more than 50 international parent- and patient organisations and numerous experts in fetal medicine, Act early! Screen early! made a massive impact for pre-eclampsia awareness. We are stunned and incredibly grateful for the support we received.

Act early! Screen early! highlights the importance of pre-eclampsia screenings within the first trimester of pregnancy. Only if the risk for developing pre-eclampsia is detected timely, there is a realistic chance to protect both mother and her unborn baby from harmful consequences caused by this serious condition. If undiagnosed, pre-eclampsia can lead to eclampsia which can put mother and baby at risk, and in rare cases, cause death. 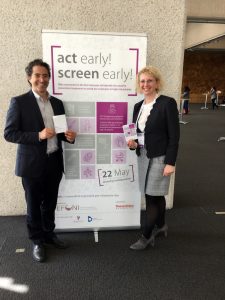 Professor Jacky Nizard, president of EBCOG and Silke Mader, Chairwoman of EFCNI kick-off the campaign at the WMFNM Congress in London. (c)efcni

The Campaign was officially kicked off at the WMFNM Congress in London, where it received a lot of attention and popularity. Throughout the month of May, we published expert statements, posted video messages by medical experts and affected women telling their story. We shared posters and banners within our network to facilitate and boost the messaging process and on World Pre-eclampsia Day, we shared a photo collage displaying the international supporters of pre-eclampsia awareness. Besides, we launched a campaign website where comprehensive information about pre-eclampsia can be found and all campaign materials are available for download. We received so much positive feedback from our network that we want to continue this campaign next year with material available in several languages. Please stay tuned for updates! 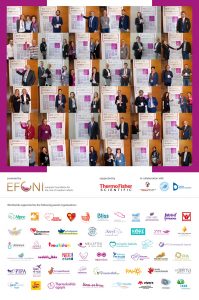 Last but not least we want to express our heartfelt thanks to everyone supporting this campaign and setting an example for pre-eclampsia awareness! From the healthcare professional stressing the importance for preventive measures such as early screenings to our video testimonials sharing their quite personal and sometimes painful experiences, to our partnering parent organisations helping to spread the message, to every individual sharing our posts on social media. Together we made it clear: it is crucial to act early and to screen early!

Please check out our campaign website for thorough information and all campaign material: www.efcni.org/activities/campaigns/world-pre-eclampsia-day/

The campaign was kindly supported by Thermo Fisher Scientific.

Your ticket for the: Act early! Screen early! May is dedicated to our pre-eclampsia awareness campaign

Act early! Screen early! May is dedicated to our pre-eclampsia awareness campaign